Tadaaki Wakamatsu Q-pot. designer collaborated with Jake Shimabukuro ukulele player! Their first encounter was in the Q-pot. Toro-ri Ribbon Project Vol. 3, early 2011. In summer after the unfortunate event of 2011 Japan Earthquake, the two reunited upon Shimabukuro’s concert in Japan and instantly created the idea for this project. Finally their aspiration was coming true.

Part of the proceeds from the sales was donated to the Rainbow for Japan Kids Project, a charity program launched by Hawaii volunteers, through MIYAGI BIKKI Organization’s “Bikki Children’s Fund”. 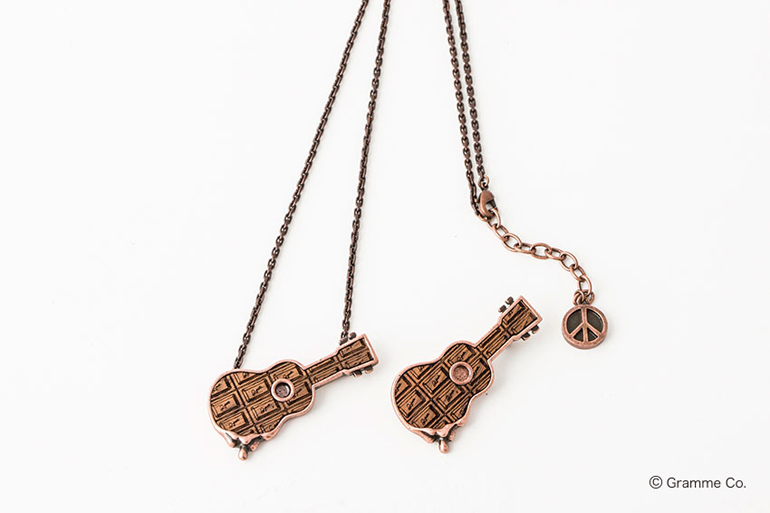 Peace of Chocolate Ukulele Necklace \12,000 (tax excluded)
Peace of Chocolate Ukulele Brooch  \8,000 (tax excluded)
※These products are no longer sold.
●PROFILE JAKE SHIMABUKURO / UKULELE PLAYER
Hawai‘i’s own Jake Shimabukuro is recognized as one of the most exciting and innovative ukulele players and composers of his time. In the hands of Shimabukuro, this traditional Hawaiian instrument of four strings and two octaves is stretched and molded into a complex and bold new musical force. His album “Peace Love Ukulele” debuted No. 1 on Billboard World Album chart. 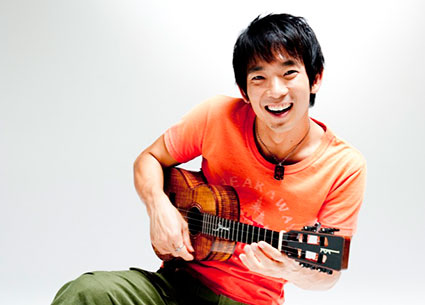 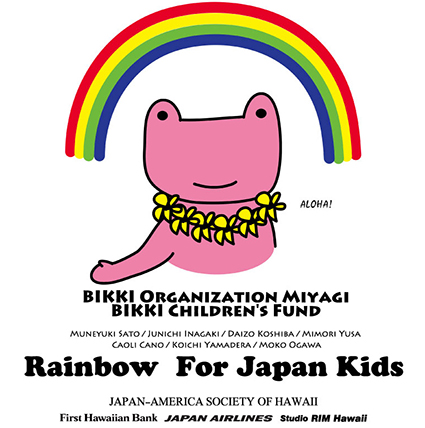 ◎The contents of Rainbow For Japan Kids
This is the invitation trip to Hawaii for 10 days arranged free. They invite the kids from Iwate, Miyagi and Fukushima Prefectures who suffered from the big earthquake and Tsunami in 2011 and lost important things or people. (For example, the people who were washed their houses away by Tsunami, or lost their family or best friends by Tsunami, or lost their school buildings because of Tsunami, or lost their hometown because the disaster of power plant happened and so on.) The trips are held twice a year basically.
The RFJK committee has meetings several times and plans the itinerary and arranges the programs. After kids arriving, they manage the trip with a lot of supports in Hawaii and spend time with kids.
In addition, Japan-America society of Hawaii, which is a member of RFJK committee and a superintendence of RFJK, has the fund for RFJK and gather a lot of donation with other RFJK committee members and cooperation groups.
The other hand, MIYAGI BIKKI Organization (below it is shortened with BIKKI.) joins as a project partner and collects the kids with some helps from local Boards of education. When the kids subscribe this project, they write essay which topic is the letter to me in future.
There is each situation in each devastated area and if time passed from the 2011 earthquake, change will also take place. That’s why we visit the devastated area every time and hear the timely information from local people. This is very effective to collect kids. Before the trip, we hold the briefing sessions and support the kids and their family to prepare the trip. The staffs of BIKKI take the kids from Tohoku area to Hawaii through the Narita airport, spend time with the kids in Hawaii and then go back to Tohoku area. After the kids coming back, we’ll hold the event like reunion once a year. All those activities by BIKKI are supported by the donation of the BIKKI Children’s Fund.
◎The aim of Rainbow For Japan Kids
The people in Hawaiian society have looked for their own ways to help the people in Japan, not just only sending donation to Japanese society because there are very strong bonds between Hawaii and Japan. Finally we decided the plan to invite the kids from Tohoku, affected by the big earthquake, to Hawaii, which is the island of Aloha with full of kindness, the island of healing with the great nature.
Hawaii has the society where much races and culture mix and live together in the great nature. We have begun this “Rainbow For Japan Kids” project putting the wish that the kids will have their own dreams or hopes and follow forcibly toward the future with turning their eyes to the large world, after touching nature, culture, history and industry in Hawaii and share time with kids in Hawaii.
( By all members from Rainbow For Japan Kids committee )
●About MIYAGI BIKKI Organization 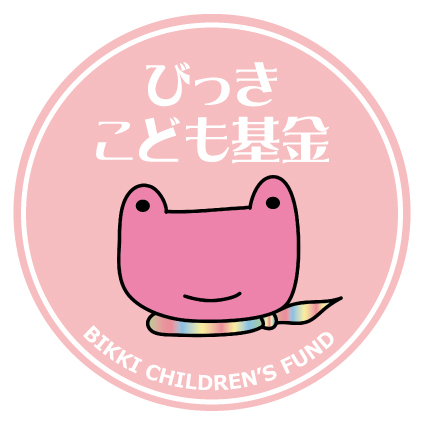 The artists associated with Miyagi Prefecture have begun to hold charity concerts every year since 2005. We donated the earnings from those concerts to support repairing the musical instruments which are used by children in Miyagi Prefecture.
BIKKI means frogs. This is a dialect in Tohoku area. We’d like to return kindness to our home country. A frog in Japanese, “KAERU” has same pronunciation of to return in Japanese.
After Tohoku big earthquake and Tsunami, March 11 2011, we decided to support children in various ways and established the BIKKI Children’s Fund in April of same year. Why we established it is to support children for a long term.
Our MIYAGI BIKKI Organization used to be a voluntary association, but we changed it to an incorporated association and prepared our office in Sendai city of Miyagi Prefecture. This isn’t so far away from devastated area, so that we can do supporting activities which met local requests.
●REPORTS
Thank you for your wonderful support, a total of ￥1,813,483 was successfully collected to donate to Rainbow For Japan Kids.
This proceeds were donated to invite the children victims of the Northeast Japan Earthquake and Tsunami in Tohoku (the Northeast Japan) to Hawaii for 10 days from March 25th to April 3rd, 2013 through MIYAGI BIKKI Organization's “Bikki Children's Fund.”
Thank you for all your cooperation.

In the left：Have a welcome party at "Suntory" in Royal Hawaiian Center and, one of members challenged to make" Sushi" !!
In the right： "Camp Erdman" in North Shore, Oahu.
Children enjoyed team building activity with lacol Hawaiian junior and senior high school students.

In the left：Children enjoyed some activities such as wall-climbing, archery and Hawaiian culture experience at "Camp Erdman".
In the right：Discuss about their dream, work and hobby with mixed group of children and adults.
●Link
・JAKE SHIMABUKURO JAPAN OFFICIAL SITE
・Bikki Children's Fund
Q-pot. will continue to create a chain of smiles across the world.