To create the chain of smiles and spread it to the world! 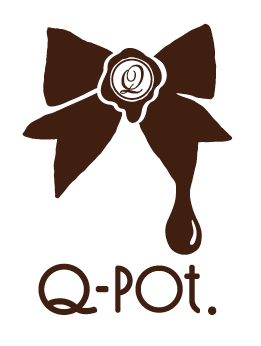 to create the chain of smiles with excitement

and spread it to the world!

Part of proceeds from the sales of the collaborated T-shirts was donated to the Water Project in Ethiopia through UNHCR.

The donations was used to make 10 water supply points, to dig wells, and to buy tanks in order to get clean water for Ethiopian people.

Tadaaki Wakamatsu collaborated with Jean-Paul Hevin and the special chocolat box was released.

Part of proceeds from the sales of this special box was donated to support women's refugee to be independent economically and to improve their living condition through UNHCR.

from various fields became "Q-pids" (Cupids) to express their love on the Chocolate Tote Bags.

We sold these bags at charity auction. Part of the proceeds from "Q-pot.♥Q-pid."

charity auction was donated to UNHCR to support independence of refugee women.

The sales amount was donated to support the victims through "Save the children Japan".

Part of proceeds from the sales of them were donated to “Save the Children” in order to support the education of children in Sri Lanka,

The project opened the tea party event in Sendai City of Miyagi prefecture,

The event was able to create beautifully decorated the cakes,

but more importantly it was successful in decorating the children’s face with beautiful smiles.

The collaboration accessories are inspired by “Ukulele” which is the symbol of Jake Shimabukuro,

the ukulele player, and “Chocolate” which is the symbol of Tadaaki Wakamatsu and everyone loves!

Part of proceeds was donated to invite the affected children of the Great East Japan Earthquake and Tsunami to Hawaii.

The second charity band for supporting the victims of the Great East Japan Earthquake was inspired by biscuit.

Part of the proceeds from the sales of “Peace Biscuit Band” was donated to “the Hawaii Rainbow Kids Project”,

Q-pot. hopes that Q-pot. school bag brings dreams and hopes of children who bear the future, and spreads their smiles.

Part of proceeds will be funding for "School Lunch Program", programed by the United Nations WFP RED CUP CAMPAIGN. 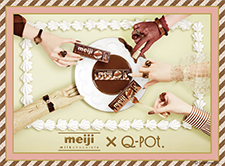 holding up a message “One Piece For World Peace”.

Part of proceeds was donated to “Nutrition Improvement Program for African refugee's children” through UNHCR.

will be donated to NGO “Save the Children”, to support education of workers and their children who work at tea leaf farm in Sri Lanka.